Published on 1 March 2022 under Joint Pain 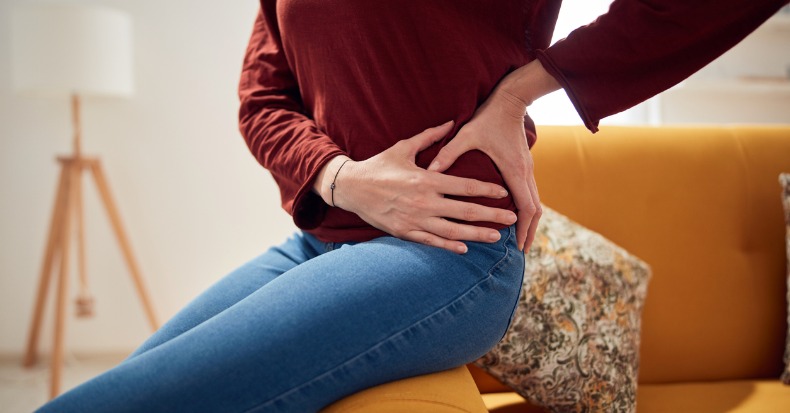 The bone you feel when you put your hand on your hip is called the greater trochanter, and it serves as an important attachment point for several muscles that move the hip in multiple directions. Greater trochanteric pain syndrome (GTPS) is a general term that has been used to describe multiple disorders that cause lateral hip pain. While trauma is a possible cause of GTPS, the condition is most often the result of overuse and repetitive friction between the muscle tendons that sprain over time, leading to tendonitis and subsequently bursitis—most commonly in women between 40 and 60 years of age. Two specific conditions that are often associated with GTPS are trochanteric bursitis and external coxa saltans.

Trochanteric bursitis involves any of the three bursa that surround the greater trochanter located on the front, back, and top of the bony prominence near the four facets where muscle tendons attach.  Historically, most patients who present with lateral hip pain are diagnosed with trochanteric bursitis or inflammation of the subgluteal bursae located deep to the iliotibial band and abductor tendons (which moves the hip outwards). However, studies have found that GTPS almost always (92% from one study of 877 patients) involves BOTH tendonitis and bursitis simultaneously, rarely either one alone.

External coxa saltans, better known as “snapping hip” is typically caused by one or two muscle tendons snapping as they ride over the greater trochanter usually during hip movements including swinging the leg forward and backward (think running or punting a football) or during internal and external rotation (think kicking a soccer ball). Interestingly, snapping hip can be painless, but if inflammation of the bursae occurs, the patient can feel lateral hip pain, which in the presence of the snapping tendon makes for a fairly easy diagnosis.

When a patient presents with lateral hip pain, a doctor of chiropractic will perform several tests to reproduce pain over the greater trochanter. X-ray, ultrasound, and MRI may also be utilized to confirm diagnosis and to rule out other causes of hip pain.

Chiropractic care for GTPS is often successful and may include multiple approaches such as manual therapy of the hip, leg, and/or low back regions; leg-length correction with heel lifts; PT modalities such as pulsed ultrasound, electric stim, laser, pulsed magnetic field, and shock-wave therapy; exercise training; and activity modification education. For stubborn cases, your chiropractor may refer you for an injection of either cortisone or plasma-rich protein (PRP). On rare occasions, surgery may be appropriate.